We have 221 guests online 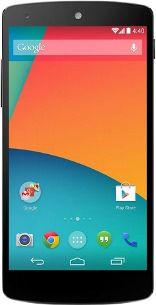 What kind of damage of your LG Google Nexus 5 should be repaired?

Replacing or repairing the touchscreen of your LG Google Nexus 5 becomes necessary if the touch functionality doesn't work properly anymore for example due to damaged display glass (cracked, scratched). Symptoms can be that the touchscreen doesn't react to touch at all, only delayed or just when applying a lot of pressure. In most cases a damaged Google Nexus 5 touchscreen can not be repaired and needs to be replaced.

The LCD display repair or replacement of your LG Google Nexus 5 is necessary, if the glass and display are still in tact (no cracks or broken screen), but the screen has other issues. E.g. the screen stays white, grey or black, has broken pixels (spots, stripes or similar) or the background light does not work anymore. In most cases the display can not be fixed and the LCD display of the Google Nexus 5 needs to be replaced.

Diagnostics/assessment of the damages is recommend when your LG Google Nexus 5 stopped working (e.g. does not turn on anymore) and you are not able to determine the problem. Once a technician was able to analyze the issue and has estimated a price for the repair of your Google Nexus 5, you are able to decide what repairs will be performed.

If you have dropped your LG Google Nexus 5 into water, you should act fast. Consequences of a water damage don't always appear right away. Immediately drying the device thoroughly, turning off the phone and if possible removing the battery can help increasing the chance of a successful repair. A professional assessment of possible damages of your Google Nexus 5 are recommended in any case. This way serious water damage can be avoided or affected parts replaced. A technician can perform diagnostics, find all affected parts and recommend fixes. Then you can decide for yourself what repairs are actually performed.

If your LG Google Nexus 5 does not charge properly anymore or you experience problems connecting to your PC or MAC a repair or replacement of the phone connector port could be necessary. Often it can also be a problem with the charger/charger cable or a broken USB cable. In any case a professional smartphone repair shop can help finding the problem and replace or repair the broken parts.

The battery of your LG Google Nexus 5 does not hold charge or doesn’t charge anymore at all? In this case you should consider getting the smartphone battery replaced.

A microphone repair or replacement for your LG Google Nexus 5 is necessary if people can not or almost not hear you anymore during a phone call. Also constant lags, tone that cuts out or cracks can point to a microphone problem of your Google Nexus 5.

If your LG Google Nexus 5 does not turn on anymore, constantly turns of or even displays error codes, a Software error or a failed Software update could be the cause. A trained technician would be able to quickly asses whether your Google Nexus 5 has a Software problem and fix the issue.

Repair of other parts

Unfortunately we are not offering a comparison of repair shops that would be able to fix this particular issue with your Google Nexus 5 at the moment. We are working hard to keep adding additional repair services to our comparison. You might still want to check in with our partners whether they offer the required repair for your LG Google Nexus 5.

Add Your Repair Shop for Free

Declaration of consent for data and tracking information

Information is stored while visiting this website and is processed for statistical as well as advertising and profiling purposes. This allows us to improve your experience on our site and to better understand what you really need from us.